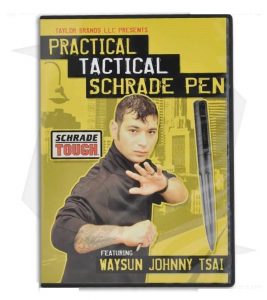 The DVD starts off with an introduction to five tactical pens made by Tuff Writer, Benchmade, and Mil-Tac. After this, he setups a staged “reality” situation and showed the viewer how to defend themselves in said situation. Then he demonstrates how to defend yourself in specific attacks such as bear hugs, basic grabs and “sucker” punches. The first few lessons focus on some basic techniques that martial artists, in general, would be familiar with. After these basic lessons, he comes down to the nitty-gritty part of the video. He shows the viewer 25 different pressure points that can be taken advantage of with a tactical pen in a self-defense situation. He then gives the viewers a slightly advanced lesson.

In the end, he demonstrates how to use the praying Mantis Hook as a defense to the sucker punch. Using the tactical pen to enhance the hook, Tsai shows the viewer how to follow-up the mantis hook with a punch combination that flows into a standing side choke hold. He deals even more force by driving the tactical pen on the attacker’s neck. The result is a very controlled way to take an attacker to the ground. Sounds advance, but don’t worry because he will teach you to step by step how to perform this maneuver and many others.

I would recommend this DVD to someone with little to no martial arts training. There is a lot of primary material to give an average citizen enough knowledge to wield their tactical pens to defend themselves adequately. You can purchase it on Amazon by clicking this link.