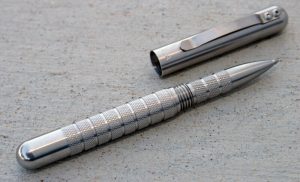 The CountyComm Stainless Embassy Elite Pen, model number 4QK35, is one of the most solidly constructed tactical pens on the market. Instead of extra-thick plastic or Grivory, this mighty pen has a body of 300 series high-grade stainless steel that can stand crushing impacts. The handle is deeply knurled for a secure grip, and there is a metal clip to keep it in your pocket until you’re ready to use it.

This pen is the culmination of a long evolution. There was an earlier Embassy pen, but the CountyComm Stainless Embassy Elite Pen weighs more than twice as much, totaling 108.4 grams. As the company’s ads like to brag, this is about the same weight as a roll of dimes, so this is a substantial pen with some severe impact power.

The CountyComm Stainless Embassy Elite Pen sells for $55 from the manufacturer, but lucky shoppers may be able to find it on other sites for as low as $45.

When buying this pen from anybody other than the manufacturer, shoppers should make sure they are getting the latest model. Unlike the earlier models, the new one has beveled threading and internally threaded housing for greater strength between the tip and the body. While the older models had an O-ring between the two parts, this has been eliminated in the new model, undoubtedly because it was so easy to lose.

CountyComm bills itself as a “government products group,” and their gear all has a stern paramilitary look. The Stainless Embassy Elite Pen has cousins in titanium and copper, and all of them bear a strong resemblance to high-caliber bullets.

As with all tactical pens, it should be pointed out that this pen’s durability is an advantage even in non-combat situations. The CountComm Stainless Embassy Elite Pen can withstand being stepped on, crushed in a door or any of the other mundane accidents that often happen to pens in the office, and it’s a safe bet that this pen will never break open in your pocket.

The only disadvantage of the CountyComm Stainless Embassy Elite Pen is that it is not an ordinary pen. There is no hope of concealment since the Embassy Elite Pen looks like the weapon it is. This may be good, for, in a situation where it might be used as a weapon, the mere sight of the instrument might make an assailant think twice.