The history of the tomahawk is quite a long tale. Tomahawks originated in North America where they were used by the Iroquoian and Algonquian Indians. They used tomahawks as tools or weapons, but they were also used in celebrations and ceremonies. The word “tomahawk” comes from the translation of the Algonquian word “to strike down.” The first tomahawks were entirely different than the current version which is sleek and made of metal. The ones used by native Americans were made of either stone, bone, rock or wood. The tomahawks that were used for ceremonial practices were ornately decorated and craftily created when compared to the ones being used in their everyday lives. These tomahawks were made of more luxurious items like silver or pewter and were held by the chiefs of their tribe.

Many native Americans had their tomahawk that they designed to suit their taste. Tomahawks were popular among Native Americans, and this is 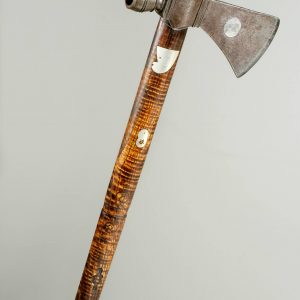 demonstrated by the various historical portraits of native Americans with a tomahawk in hand. Many of these tomahawks were ornately decorated with different materials such as rawhide, brass, paint, even stonework, like turquoise and onyx inlays. The most common embellishments on Native American tomahawks were medicine bundles, which were thought to bring about supernatural victories during battles. Another common decorum added to Native American tomahawks was eagle feathers, which was earned for acts of bravery.

As time passed, Native American tomahawks were made from higher quality materials such as brass or iron. The Europeans introduced them to the metal blade in exchange for various items. The Native Americans greatly prized their new, more powerful tomahawks used them significantly during battle. Europeans and American artists created special poll tomahawks as diplomatic gifts for the Indians. The poll of the tomahawk’s head–the side opposite the blade–consisted of the spike, hammer, or even a pipe. These pipe tomahawks, which were made with a bowl on the poll and a hollowed out shaft. The poll tomahawks symbolized two sides of a coin which are peace and war. The Indians considered the pipe tomahawks as favorite multi-purpose tools.

During the American Revolutionary War (1775–1783), American military men were required to carry either a tomahawk or a chopping sword in the field. The Continental Congress mandated this so that they have a backup weapon in the area plus it had other uses like to chop wood or dress game. The flintlock guns that were used at the time were unreliable and slow to reload so having a tomahawk was important in case of a close-range encounter.

Later on, in history, Peter LaGana, the founder of the American Tomahawk Company, revived the tomahawk during the Vietnam war. As a WWII veteran of Mohawk descent, he was no stranger to war. He created and sold thousands of tactical tomahawks for military personnel by direct mail service to American troops serving in Vietnam. He changed the design of the tomahawk in a significant way. His updated tomahawk featured a robust and penetrating spike for the poll. This model of the tomahawk is now referred to as the Vietnam Tomahawk. Most modern tomahawks are made based on the Vietnam model.

Today, the tomahawk continues to be part of the American Military where it is used in operation in Afghanistan and Iraq. The current models are robust in that they can be used to destroy Kevlar helmets. The soldiers mostly use because of its multi-purpose purposes such as smashing windows, breaching doors, breaking locks, deflating tires, chopping through cinder blocks, and opening crates. It can also be used for recreation where people throw it for sport and amusement to pass the time. The history of the tomahawk continues to be made now in the present so do not let it die down and keep talking about the all mighty tomahawk.If you want to get started right now you can make your own tomahawk.